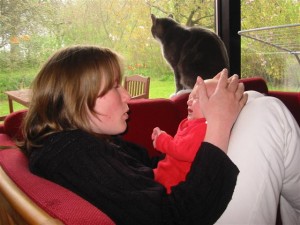 Today I still had trouble sleeping more than half an hour at a time. I fall asleep if someone is holding me, or taking me for a ride. But as soon as they put me in bed or stop rolling the pram, I wake up again. When its after eight pm I can sleep again, until next morning only interrupted by a meal or two.

Garo (my fathers cousin) called us today. He is very nice and gave me a big gift. Around June 1st, he and Ani will have a baby as well, so he is very exited. Garo said, that they would try to come to Denmark next year sometime, so we could se each other. That would be very nice. Actually my parents discussed if we could go to Canada next summer maybe only yersterday. I hope at least one of the things will happen, it could be very nice to see my family in Canda and the US as well